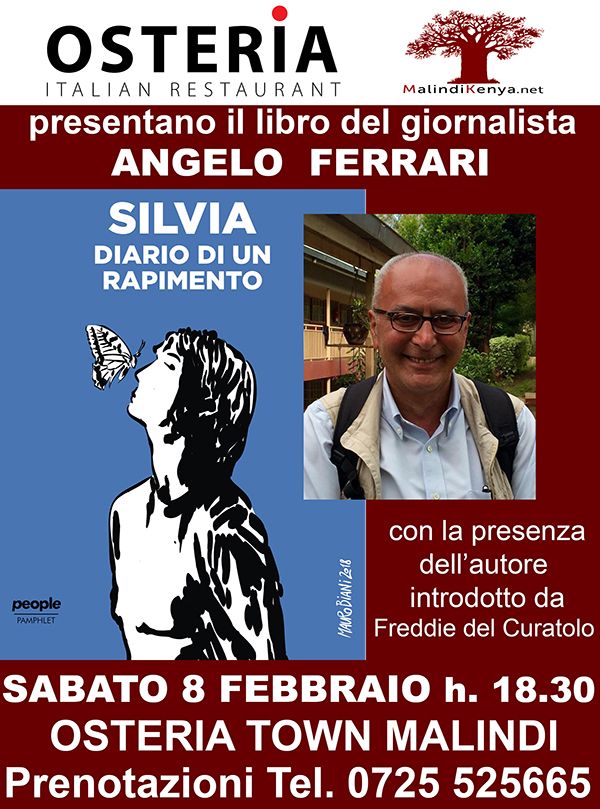 On Saturday 8th February at the Osteria Town in Malindi the only book on the kidnapping of the Italian volunteer Silvia Romano is presented, in the presence of its author, the Italian journalist Angelo Ferrari, introduced by the colleague and director of Malindikenya.net Freddie del Curatolo.  (6.30 pm with aperitif, free entrance, seat reservation recommended).
Of the sad and still inexplicable story, after that dramatic night in the hinterland of Malindi, in a little less than fifteen months many, maybe even too many words have been said.
Often "Verba volant", as the Latins used to say.
But in all this time it is no coincidence that only one book has been written, because when the "scripta manent" the words must be able to be reread even after days or months. Specifically, they must be words that question ourselves not only about the situation in Kenya and Africa, but about the meaning of volunteering, especially by the new generations, and about who manages or "diverts" it.
This book is entitled "Silvia, Diary of a kidnapping" (Edizioni People). Angelo Ferrari works for AGI and is a deep connoisseur of African reality, having worked there for years. His news, often in preview, about research and investigations concerning the Milanese girl of which nothing is known yet, have always been taken up by the major press.
The publication is a dry and respectful chronology of what happened, between the words of our institutions, those of Kenyan investigators and those who took part in the story.
The mystery of his disappearance and of what may have happened has not led Ferrari to throw himself into abstruse conjecture or, as other colleagues have done from the beginning, to shoot every day in a different direction hoping to "catch" the right one, creating only confusion and false expectations.
The journalist writes, for example, skilfully summarizing the uncertainty that adds up to uncertainty: "The Kenyan police force says nothing. Neither do the Italian authorities. How to interpret this silence? A kidnapping carried out by a gang of common criminals which, however, with time, seems to have broken up after the arrest of one of the members. It is not clear whether the young woman has passed from hand to hand, perhaps sold to a more organized gang of criminals. It is not clear, either, where the young Italian collaborator is". Words which (unfortunately) still reflect the present situation.
For those who do not want to forget and have a serious and uncritical reading of the story of Silvia Romano, "Diary of a kidnapping" is an important book. Saturday's presentation in Malindi, as well as being absolutely the closest, physically, to the places of the misdeed, is a necessary moment to take stock of the situation with two professionals who have followed this story from the beginning and continue to do so, not in the hope of making the "scoop", but that everything ends with a happy ending.