Do italians escape from Malindi because of terrorism?

No, brain escapes from italian journalists talking about Kenya 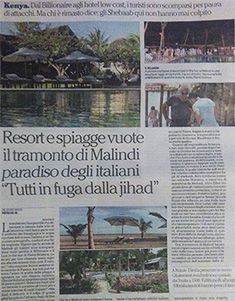 We have not done in time, a few days ago, talking about news finally obbiettive, positive and true (not triumphalist, for heaven's sake) on Italian newspapers and magazines, comes the jab of the usual sensationalist B-series.
This time is Republic to unleash even an envoy, Peter Del Re, who on his way to Malindi in mid-April, he discovers that there are Italians, the beaches are deserted and concludes that it is guilty of terrorism.
The article in itself would not even terrible, but titlist reveals a line "policy" aimed at trying to force the "bad."
If there is fault, while we know that it is a worldwide phenomenon. Second, the Italian economic crisis but above all you can do this consideration during the rainy season? The writer makes it even leaked, but as always the preparation, more and more prey to the syndrome of the news at all costs, packs this titolaccio: "Resort and empty beaches, sunset Malindi paradise Italian: all fleeing from Jihad ". Fantastic! When will an article on the escape of the neurons from the heads of journalists to certain newspapers? How can one speak of a decline of 50% and blame on the attacks from distant holiday destinations of which the most recent is dated a year ago? How about going to see the decline of Italian tourists on the French Riviera and imputassimo attack in Paris ...
In fact, the major fault (and it is a pity that all respondents have not mentioned it) is the one of the newspapers that continue to invent or to inflate news. Trying to thwart the efforts of those of us every day is involved in the promotion of Kenya and those in Kenya continues to invest in good faith.
The hope is that fewer and fewer people are inclined to believe in this kind of journalism, and that the word "paradise" remains however well imprinted in those who know that now all over the world there is danger. And that if the alternative is not to travel, do not get excited, do not enjoy the wonders of Kenya, it is a life almost as sad as that of a titlist Republic.