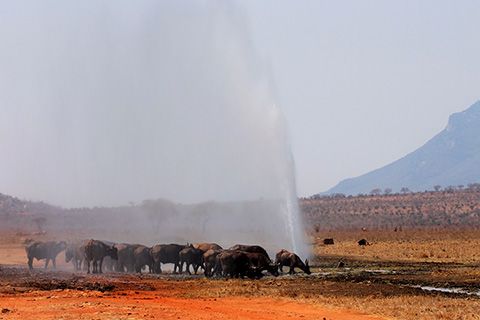 The sudden bursting of a pipe in Tsavo was enough, and for the animals, which were tested by drought, it was a great feast.
The Tsavo East is still in emergency drought and while on the coast the predictions give insistent rain and in large quantities, probably the park will only marginally benefit from all this good of God.
Alternative solutions are sought to provide the source of extreme animal survival difficulties.
After all, mankind has been guilty of systematic destruction of fauna for too many centuries and now perhaps the time has come to intervene, even in contravention of the theory that everything must be regulated by Mother Nature.
There are two practical proposals: irrigate some areas of Tsavo using pumps that take water from the river or underground aquifers to grow the grass again and green the plants, thus ensuring food for herbivores.
A second proposal envisages the possibility of bringing branches with green leaves in large quantities, to be left around the water sources, in order to give everyone the chance to eat in a more substantial way than the dry food that currently offers the savannah.
However, they must be submitted to KWS, which will first have to analyse them and then, if necessary, issue a regular authorisation. But while discussing these hypothetical solutions, the case may have been intended to anticipate events at least in the Pipeline area.
Last Sunday, a pipeline pipe leading to drinking water to Mombasa suddenly broke out.
The welding between the pipes has yielded and a very strong jet of fresh water has come out in an area where the soil is made up of clods broken by the sun. We were present, alone and inebetized by the unusual spectacle, savouring every moment in its uniqueness.
The atmosphere was clear and fresh, while the sound of water accompanied the morning silence like music.
We send a photo to the Senior Warden of Tsavo, Mr. Felix, who will notify the company that manages the maintenance and will be random with the name that brings but accompanies his message of response with so many smiling emoticons.
It's a feast for everyone! We also put the photo on Facebook and it's a joy to live in the hope that the repair will happen later. In the meantime, the water continues to come out and form rivulets and ponds all around, so we decide to stay and observe the reaction of the animals that don't remain insensitive to the new event. At first a herd of buffaloes approaches: the head of the herd, with its big bovine shape, sees the water jet venture nearby with the snout raised up high.
The light puff is picked out and blows on the surface of the water before drinking. Then, one by one with the bushes of dry grass, other buffaloes emerge, which joyfully immerse themselves in the pools of fresh water and begin to drink, sprinkled also by a micronized drizzle that the wind disperses from the jet of water that comes out more and more generous.
A glossy black mass, horns that look like waxy and muzzles satisfied by this unexpected enjoyment that awakens their chronic apathy. They stop for an endless period of time and then leave it to leave room for the zebras which, more guarding, with tall heads and straight ears, proceed to trot in a furious attitude heading towards the new pond and approaching with fear to watering. But for them, too, it's an unexpected pleasure: they climb and play happily, reinvigorate again.
The reaction of the elephants that curiously intrigued by the water jet approach small groups: they observe, smell but then, on the advice of the matriarch, they go out to trotting to other more stagnant water sources. The blackcotton soil is becoming too slippery with the risk of sinking, given their size and weight, while surely for the little ones it would be a deadly trap. Visibly satisfied with it with the intention of taking advantage of it at a later stage when they have studied the situation well and for them too the excitement is contagious and stir the ears in a gesture of happiness. In the meantime, the first buses arrive and a road sinks into the road, which is now a mud river and you can't help but think that animals have a natural intelligence and know how to feel the danger unlike others.
The machine of the maintenance company also arrives but unfortunately, for them, it is Sunday and they will be able to intervene only the next day.
For all of us it is good news considering that for at least another 24 hours the water will continue to flood this desert landscape for too long and that in the meantime among animals there will be a word pass that will lead them to drink fresh water, not stagnant and imputuous by the burning sun. How not to be in solidarity with the African fauna that must earn hard to survive every day and in a period of emergency. 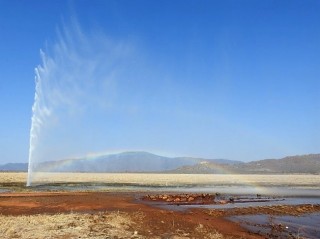 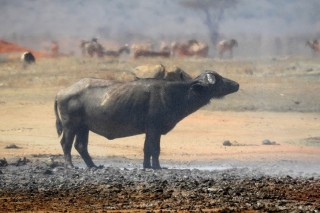 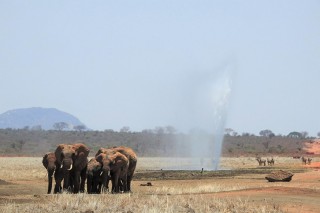 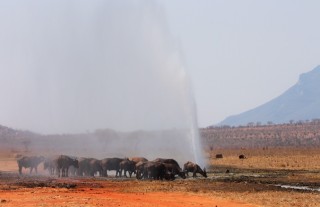 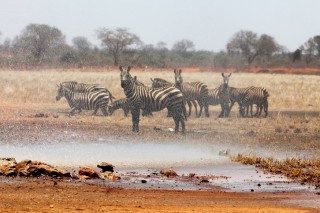 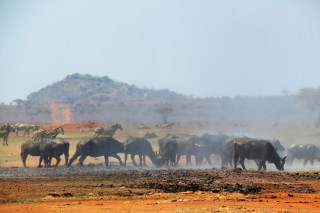 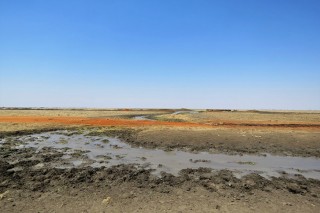 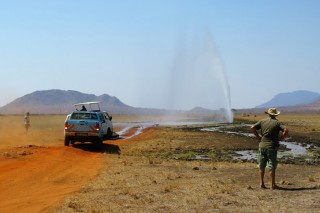